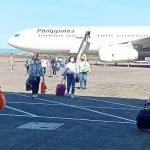 Philippine Airlines (PAL) flights to the Subic Bay International Airport (SBIA) under the government’s repatriation program for overseas Filipino workers (OFWs) will continue here until the yearend even as travel curbs were imposed by some countries to stem the spread of the latest Covid-19 variant Omicron.

For the first time on Sunday, two PAL aircraft arrived here within two hours of each other to bring home two more batches of OFWs from Abu Dhabi and Dubai, both cities in the United Arab Emirates (UAE).
The recent arrivals brought the OFW flights via Subic to a total of 42 and the passengers coming in through the Subic airport since July this year to a total of 11,410.

“The OFWs continue to be repatriated through Subic, and everything’s as normal as when the program started here in July,” Subic Bay Metropolitan Authority (SBMA) Chairman Wilma T. Eisma said on Sunday.
“We can be assured that no passengers will be brought here from any red-listed country because the government has prohibited the inbound international travel of all persons from red-list areas regardless of vaccination status,” Eisma added.

The Philippines’ Inter-Agency Task Force (IATF) had earlier placed South Africa, Botswana, Namibia, Zimbabwe, Lesotho, Eswatini and Mozambique on the red list after the Omicron variant was identified in South Africa last November 25.
But as the variant was discovered in Europe days after, the IATF added to its list Austria, Czech Republic, Hungary, The Netherlands, Switzerland, Belgium and Italy effective November 28 until December 15.

The government had earlier said it planned to suspend measures to relax entry for vaccinated tourists because of the emergence of the Omicron variant, but the Department of Health (DOH) said on Saturday that there was no reason to panic over the Omicron as there has been no sudden increase or clustering of cases lately.

Eisma also pointed out that the OFW repatriation program here is being handled carefully by the Department of Transportation, Overseas Workers Welfare Administration, and Bureau of Quarantine.
“We all see to it that IATF guidelines on health safety are strictly enforced while the repatriation program continues here,” she added.

According to SBMA Senior Deputy Administrator for Operations Ronnie Yambao, more PAL flights are expected this month because of the holiday season.
He said 10 OFW flights from the UAE were scheduled in Subic this December: the first on December 3 followed by two on December 5; then on December 10, 12, 17, 19, 24, 26, and 31.

So far, a total of 42 OFW flights had brought in 11,410 passengers, including returning overseas Filipinos, to the Subic Bay Freeport, said SBIA manager Zharrex Santos.
These included six flights in July, seven in August, 10 in September, five in October, 11 in November, and three so far in December, Santos said.
Upon arrival in Subic, OFWs and other returning Filipinos are required to stay in Subic hotels for a BOQ-supervised quarantine of up to 10 days.