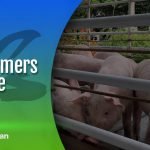 Swine were distributed to farmers in Orani under the INSPIRE program of the Department of Agriculture (DA) through the Provincial Government of Bataan. Board Member Benjie Serrano, Sangguniang Panlalawigan Chairman of the Committee on Agriculture representing Gov. Joet Garcia and Provincial Veterinarian Dr. Albert Venturina led the distribution.

“The swine distribution aims to help Orani farmers affected by African Swine Fever (ASF) not to mention the pandemic”, the BM Serrano said. “The provincial government is initiating or coordinating with concerned agencies for programs to help farmers and animal raisers”, he added.

Venturina said INSPIRE program is being implemented in all towns of the province.

He said there are 15 beneficiaries per town each getting 10 heads of swine, 2 sacks of feeds, disinfectant, vitamins, dewormer and antibiotic.

The program INSPIRE (Integrated National Swine Program Initiative For Recover and Expansion) also aims to still determine the presence of ASF in the areas by checking hogs blood samples after 40 days.

Said program was launched in the province on August 23, 2022 and is expected to cover all towns by November.

The post Orani farmers get swine appeared first on 1Bataan.