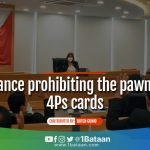 The post Ordinance prohibiting the pawning of 4Ps cards appeared first on 1Bataan.