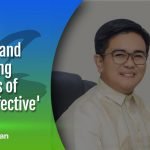 Newley elected National Movement of Young Legislators (NMYL) Bataan chairperson and Mariveles Councilor Ivan Ricafrente said that he wants young legislators in the province to be organized with the aim to make their ranks more effective and productive.

He is grateful for the opportunity to make a change. Members of NMYL from Central Luzon elected officers in a convention in Clark, Pampanga a week ago. NMYL is a league of elected young lawmakers aged 40 years old and below, which includes vice governors, vice mayors, provincial board members, city and municipal councilors and Sangguniang Kabataan federated presidents and chairpersons.