P47m worth of agri-machineries distributed to Bataan farmers 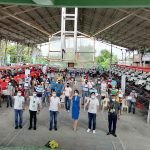 P47m worth of agri-machineries distributed to Bataan farmers

They were joined by Orani Mayor Efren Pascual Jr., Councilor Tonton Reyes and Joel Datur of PhilMec. Agriculture Secretary William Dar and Senator Villar delivered their messages via recorded videos.
Both Roman and Garcia said Bataan farmers and other stakeholders have been slowly reaping these benefits under the Rice Competitiveness Enhancement Fund (RCEF). The 1st and 2nd batches of distribution started in Hermosa, and Pilar towns.

The said project is under the over-all management and distribution of the Department of Agriculture- Philippine Center for Postharvest Development and Mechanization (DA-PhilMech) in collaboration with the Office of Senator Cynthia Villar and Bataan lawmakers, Congresswoman Roman and Congressman Joet Garcia of Bataan Second District.

For the year 2021, almost P47 million (P46,287,558.) worth of rice machineries like four-wheel drive tractor, hand tractors, rice combined harvesters, riding type transplanters, rice reapers and rice threshers were distributed to various Bataan farmers associations and cooperatives.
Congresswoman Roman discussed some of her authored House Bills for the welfare of farmers in the country while her brother and legal consultant, Atty. Tony Roman III, discussed other related House Bills.

Meanwhile, Governor Garcia said that before the year ends, a rice mill and mechanical dryers will soon be placed at the 1Bataan Command Center for the utilization of Bataan farmers.
The goal of the RCEF Mechanization Program is to reduce the cost of rice production from PHP2 – PHP3 per kilogram through the use of accurate, effective, and complete set of machinery to reduce postharvest losses by 3-5 percent through the use of appropriate and efficient postharvest machinery.

The program is part of the annual PHP10-billion RCEF created under the Rice Tariffication Law to enhance the competitiveness of Filipino rice farmers in a liberalized rice industry.
The other three RCEF components, with their corresponding budget for six years that started in 2019, include seeds distribution (PHP3 billion), credit (PHP1 billion), and extension and training (PHP1 billion).

The post P47m worth of agri-machineries distributed to Bataan farmers appeared first on 1Bataan.