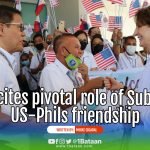 “The former United States Naval Base plays a pivotal role in the relationship between the Philippines and the US, such that a rich cultural history between the two countries is deeply ingrained in Subic Bay Freeport,” remarked Subic Bay Metropolitan Authority (SBMA) Chairman and Administrator Rolen C. Paulino.

Paulino gave the statement during US Ambassador to the Philippines MaryKay L. Carlson’s visit to the Subic Bay Freeport (SBF) on Wednesday, November 9. The chief executive accommodated Carlson during her visit to the SBF during an ocular inspection of the area. Carlson cited that Subic Bay, being once a former US naval base, is a sterling testament of the long history of partnership between the United States and the Philippines.

The official also added that the SBF has been a favorite go-to area for US retirees, with many expats spending the rest of their lives here. Paulino also mused that the Subic special economic zone is a viable option in case the United States is currently eyeing to relocate some of its companies to the Philippines, due to the freeport’s logistical advantage and hardworking people.

He further disclosed that there are almost 170,000 employees working in various companies inside the SBF, adding that there are 47 American locators that have chosen to build their equities here. This is mostly due to English-speaking employees accounting for ease of communication, resulting in a better, more efficient, and effective workforce, and higher productivity.