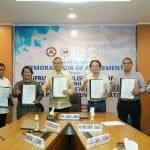 “With the entry of the Philippine Coast Guard (PCG) – Aviation Force in the province together with our Metro Bataan Development Authority (MBDA), Philippine National Police (PNP), and other men in uniform, lalong titindi ang air, land, and sea capability ng Bataan and this is for the security and development of our province,” said Governor Albert Garcia during the signing of the Memorandum of Agreement for the Usufruct Establishment for Air Station of the PCG and Air Strip Usage of Camaya Pad in Mariveles Bataan, held last June 29, at The Bunker.

The said agreement was made and executed among the Provincial Government of Bataan (PGB) represented by then Governor Abet Garcia, Magic Leaf Marine Logistics Corporation (MLMLC) represented by President Manuel Carlos Ilagan, PCG – Coast Guard District National Capital Region (NCR), and PCG – Coast Guard Aviation Force represented by Captain Christine Pauline Diciano in the presence of other public and private agencies partnering in the said project. According to MLMLC President Ilagan, they are eager to work with the Provincial Government of Bataan and the national agencies in providing quality service to the Bataeños.

Gov. Garcia (now Congressman of the 2nd District) also mentioned that with a PCG Air Station here in the province, PCG personnel can also be one of the beneficiaries of the housing project of the PGB in partnership with the National Housing Authority (NHA) and the Department of Human Settlements and Urban Development (DHSUD) intended for the men in uniform in the province. This kind of project, opened a lot of job opportunities not only for the Bataeños but also for the residents in nearby provinces as well.”