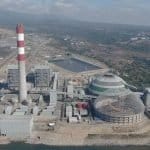 A Chinese enterprise is set to build the largest power plant in the Philippines!

This was confirmed by Chinese Ambassador to the Philippines Huang Xilian during his visit to the Dinginin 2×660MW coal-fired power station, Monday morning, in Mariveles, Bataan.

The Unit 1 of the project has been generating power, and the Unit 2 is expected to be synchronized to the grid around the corner. Upon completion, the Ambassador added, it will be the largest power plant and the first one to apply super-critical power-generation technology in the Philippines.

The Chinese envoy said that once put into full operation, it will be capable of distributing 5.8 billion Kwh of electricity every year, a huge relief to the Filipinos suffering from the shortage of power.

The project has so far created 22,151 working opportunities to the people of Bataan and it was “built with a vision of energy conservation and environmental protection.”

Its on-site equipment can ensure long-term and stable power output while conducting qualified treatment of harmful gases generated during production.

“Applause for the China-Philippines infrastructure cooperation! I wish the two countries could carry out better green energy cooperation in future to satisfy the need of Philippine people!,” Amb. Xilian said.