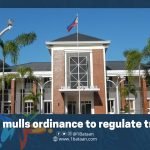 Confusion and useless arguments over the issue of the number of tricycle drivers from Balanga allowed to ply Pilar town and vice versa will soon be over upon completion of a municipal ordinance governing the transport group.

Pilar Vice Mayor Cecilia R. Garcia disclosed last Tuesday that the Sangguniang Bayan (municipal council) is now crafting an ordinance to regulate and put things in order for the smooth operation of tricycle drivers and operators plying the Pilar-Balanga route.

“We will come out with an ordinance to govern, control and iron out kinks in the operation of tricycles from Pilar going to Balanga City to avoid controversies and confusion among tricycle drivers and passengers regarding the issue of fare and terminal,” Vice Mayor Garcia said. The municipal government will issue 400 stickers to tricycle drivers from Pilar. “Kung ilan ang inisyu ng Balanga, yun din ang number of stickers na i-issue ng Pilar,” she said.

“I think we can remedy this situation which affects both tricycle drivers and passengers, more so the passengers, by passing an ordinance to resolve the issues” the vice mayor said. She said Pilar Mayor Charlie Pizarro had initiated the granting of fuel subsidy worth P5,000 to tricycle drivers with franchise.

Previous Samal distributes medicines to the needy Next Centenarian gets P50,000 from Mariveles LGU