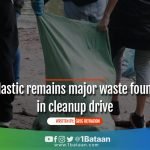 Meanwhile, Samal Mayor Alex Acuzar takes pride that Samal is one of municipalities which had the big number of participants and supporters in the cleanup drive themed: “Fighting for Trash-Free Seas Pilipinas.”

All towns and villages joined the annual International Coastal Cleanup Day which is held every third Saturday of September to raise awareness on the growing garbage menace in the country’s coastal areas around the world.