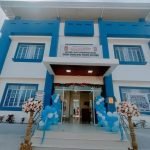 Bataan First District Representative Geraldine B. Roman graced the event.
The construction of these new police stations was made possible thru the help of the provincial government of Bataan, Congressional Offices of Reps. Garcia and Roman, and DPWH Bataan.