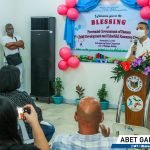 Employees of the Provincial Government of Bataan (PGB), who have children ages three to four, can now work without worrying about their kids as the Provincial Social Welfare and Development Office (PSWDO) inaugurated today, November 23, the PGB Child Development and EduChild Resource Center.

Governor Albert Garcia led the inauguration ceremony of the facility which is located at the Bulwagan ng Bayan, a few meters away from The Bunker, the new Capitol building of Bataan.

Garcia lauded the new facility as another milestone of the Provincial Government in promoting the growth and development of Bataeño children who are the future leaders in their respective communities.

For her part, PSWDO Head Marilyn Tigas said the Center is part of their strategic initiative to enhance the learning journey of the children and uplift the EduChild program, a brainchild of Bataan Second District Representative Joet Garcia.

Currently, PSWDO is in the process of profiling PGB employees who have eligible children that will serve as enrollees to be managed by four accredited day care workers.

Moreover, Department of Social Welfare and Development (DSWD) Assistant Regional Director Lalaine de Leon commended the timely inauguration of the center as it coincides with the National Children’s Month this November.

Also present during the event were Vice Governor Cris Garcia and City/Municipal Social Welfare and Development Officers who also gave their full support to promote and safeguard children’s rights in Bataan.

Previous “If there’s a will, there’s a way” – Vice Gov. Cris Garcia Next BFAR gives aid to Hermosa fisherfolks