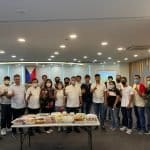 Bataan officials led by Vice Governor Cris Garcia had a taste of rabbit meat dishes presented to them on Monday.

He said the special dishes were brought to the Governor’s Office and the Sangguniang Panlalawigan at The Bunker on Monday. Dr. Paguia and Provincial Veterinarian Dr. Albert Venturina headed the presentation of rabbit meat dishes.

Paguia said the apparently satisfied Vice Governor Cris and the entire SP members have offered Market Day to sell fresh rabbit meat, rabbit products, and rabbit dishes and meal at least once a week at The Bunker.

The PVO and BPSU Office of the Vice President for Research, Extension, and Training Services implemented the project.

Paguia added that the activity is part of their initiatives in developing awareness of the consuming public on rabbit meat production especially among policy makers and chief executives of the province.

He said they hope the products of BARMPP will be able to create and penetrate markets.

Aside from the vice governor and other members of SP, Paguia thanks Gov. Abet Garcia and Dr. Venturina for the support to rabbit meat industry in the province.