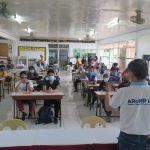 The activity is one of the components of the BPSU-Provincial Veterinary Office project entitled “Livelihood Assistance on Rabbit Dispersal for Meat Production” program which aims to promote the regular consumption of rabbit meat as an alternative source of livelihood in the province.

Vice President for Research, Extension, and Training Services Dr. Hermogenes Paguia said lectures and presentations were given and facilitated by founder and president of the Association of Rabbit Meat Producers Artemio C. Veneracion Jr. “Basic knowledge on commercial rabbit raising including sexing, proper handling, and breeding were imparted to training participants.

Mr Veneracion also showed them the multiple benefits and products they can get from raising the animal.

He also emphasized on the rabbit meat’s rich nutritional composition to encourage the beneficiaries in promoting commercial rabbit raising”, the BPSU official said.