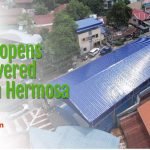 Bataan 1st District Rep. Geraldine Roman on Thursday led the blessing and formal opening of the recently completed multi-purpose covered court at Barangay Culis in Hermosa, Bataan. The project was implemented by Bataan 1st District Engineering Office of the DPWH.