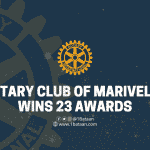 For Area of Focus Top 10 in District Project Club Awards, RCME got Maternal and Child Health and Water, Sanitation and Hygiene.

Previous Gov. Abet: We face challenges in the next 3 years Next Susi at espada