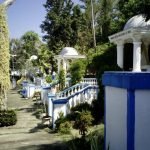 The Sacrifice Valley in Hermosa town in Bataan will soon become a tourism hub that is expected to draw both local and foreign tourists given the village is being likened to a Holy Mountain in the Bible.

Clement Percival Penaflor, municipal tourism officer, said the Nature’s Basilica and Stations of the Cross are among the attractions in the Sacrifice Valley. It has been popular among local folks as an important pilgrimage destination more particularly during the Holy Week.

Penaflor recently met with heads of municipal planning and development office and the public employment services office and later their first consultation meeting with barangay officials of Sacrifice Valley. to discuss the project to develop the religious shrine as a tourist destination.

The Sacrifice Valley also known as the “Holy Mountain” continues to draw the attention of thousands of Marian devotees and people from all walks of life to see for themselves the “wonderful” site of religious pilgrimage.

Bishop Ruperto C. Santos, of Balanga Diocese, said “It is the call and mandate of the LGU’s tourism office. We respect their decision.”

Penaflor who is recently appointed to the post by Hermosa Mayor Jopet Inton is looking into possible development of historical markers in that municipality to attract tourists.