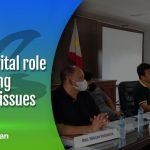 The Sangguniang Bayan or municipal council in every municipality not only crafts important ordinances but also plays a vital role in resolving at the very least in tempering the developing intensity of animosity among local residents.

A case in point is the Sangguniang Bayan of Hermosa, a progressive town in the First District of Bataan where a number of controversial land disputes are being heard in local courts. Regalado Santos, a Sangguniang Bayan member of Hermosa and chair of committee on justice, said before proceeding with the public hearing of a particular case said: “Hindi lamang po isang tao ang nagde-decide sa mga kasong idinudulog sa amin, lahat po kami ay sama-samang nagpapasya ayon sa merito ng kaso.” Santos usually reads out the basic rules on parliamentary procedure before proceeding with the public hearing.