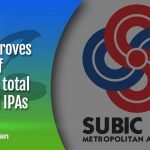 A total of ₱32.98 billion in foreign direct investments (FDIs) approved in this premier freeport accounted for 71.34 percent of the total ₱46.23 billion approved by all Investment Promotion Agencies (IPAs) in the country during the second quarter of 2022.

Paulino attributed the said significant leap mainly to the aggressive efforts of the SBMA business group in attracting investors to make it happen in the Philippines, especially in Subic Bay. He also said that this is also partly a result of the implementation of the Fast, Friendly, and Flexible service to the SBMA’s stakeholders to help in the economic recovery from the effects of the pandemic.

“We want companies to invest inside the Subic Bay Freeport Zone, and to do so, we want them to have a friendlier atmosphere while providing flexible terms for them in a fast and efficient way,” he said.

Paulino, likewise, disclosed that these FDIs approved by the SBMA Board of Directors showed a surge of 30,205.9 percent from the first quarter’s ₱108.83 million to the second quarter’s ₱32.98 billion this year alone.

“The investment growth at the Redondo Peninsula where the biggest approved projects for the second quarter of 2022 will be located will certainly spur growth in the area. The agency expects more influx of FDIs once these companies are in full swing,” Lee stated. Lee said that Agila would be utilizing the Redondo Peninsula area as an industrial park for ship repair companies. He said that the biggest foreign investor Vectrus Subic Corporation is engaged in general logistics services and service exports. He added that the company would be subleasing the area currently leased by Agila at the former Hanjin Shipyard facility in Redondo Peninsula.

Meanwhile, apart from the ₱32.98 billion in foreign equity of FDIs, the SBMA also approved ₱2.37 billion in Filipino equity, which is part of the 37 investment projects approved for the second quarter and will generate employment for 433 residents of Olongapo City, Bataan, and Zambales.