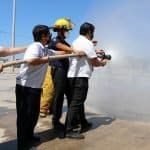 The exercise was conducted in coordination with the SBMA Fire department with the participation of Seaport department personnel and some 40 security and safety officers from various locators and stakeholders within the facility.

SBMA Chairman and Administrator Rolen C. Paulino said that the Emergency Response Exercise is part of the SBMA’s thrust to strengthen its capabilities to respond quickly to different emergency scenarios that may arise inside the port facility.

Paulino added that the exercise aims to test the existing procedures and contingency plans in case of emergency, namely, the capabilities of the emergency responders, the communication skills and coordination, and the resource availability and response.

Diego Aviles of the Port Operations Division of the SBMA Seaport Department explained that as part of the exercise, a scenario was created wherein a building inside the NSD was caught on fire.

The Shipyard and Field Monitoring Officer then immediately reported the incident to his supervisor and tried to extinguish the fire, but failed. Then the Fire department arrived at the scene.

Aviles explained to participants that the Fire department knew nothing about the scenario they created aside from an on-going training. This is to determine how fast before the fire truck could actually reach the site, which their Citizen’s Charter requires seven minutes.

Aviles called the Fire Station, which is about two kilometers away from the site, and reported a burning building at the NSD, but it was only a drill.

True to is Citizen’s Charter, the responding fire truck arrived in six minutes and 11 seconds.

Aviles further explained that a tiny spark could become destructive with the presence of high temperature and strong wind, which are both present this time of the year especially in areas like a seaport facility.

The participants were given basic training on fire prevention skills like the use of fire extinguisher and handling of a fire truck hose.