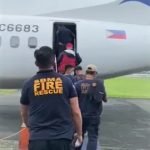 The team brought along emergency rescue equipment like chainsaws, power tools, ropes, and portable generators for the rescue and clearing mission, Eisma said.
Authorities said at least 15 people died in the island, which also lost its electricity and is reportedly running out of potable water, food, and medicines.
Eisma said the SBMA team will also coordinate with local officials in Siargao to restore power and communication facilities in the island.
“We understand that time is very crucial at this stage of disaster response, so we immediately sent in our rescue team as soon as we can find some transportation for them,” Eisma said.
“Our team, which is headed by SBMA fire chief Ranny Magno, an acknowledged expert in disaster and emergency operations, are experienced in this kind of operations and have specialized in urban search and rescue,” Eisma added.
She pointed out that in the last five years alone, the SBMA emergency rescue team “has proven its capability during disaster missions in Baguio, Cagayan, and Bicol, as well as during floods and fires in communities surrounding the Subic Freeport.”
The team is expected to carry out its mission in Siargao within 10 days, Eisma said.
Meanwhile, as in previous disaster responses, the SBMA manpower augmentation is followed by a donation drive.
SBMA Public Relations manager Armie Llamas said the SBMA has called for donations last Saturday from Subic Freeport stakeholders. The requested items included sleeping mats, hygiene kits, easy-open canned goods, mosquito nets, pre-loved clothes, and bottled water.
“We are now gathering the donations from locator-companies and residents in Subic, as well as SBMA employees, and once we have enough, we will send these through the DSWD (Department of Social Welfare and Development) and OCD (Office of Civil Defense),” Llamas said.
Eisma said the Subic community has been giving its all-out support to donation drives by the SBMA, thereby complementing agency’s emergency assistance. “This is our routine response in the past five years whenever some disaster strikes and the situation is desperate,” she pointed out.
“We understand that timely response is imperative and we need to act fast. And we are so fortunate that our stakeholders are very sympathetic to our efforts in helping others,” she added.