Sen. Villanueva eyes establishment of School of Medicine in BPSU 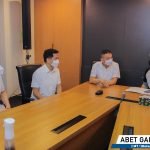 Sen. Villanueva eyes establishment of School of Medicine in BPSU

As the country faces shortages in medical professionals highlighted during this time of the pandemic, Senator Joel Villanueva is proposing the establishment of a School of Medicine in state universities and colleges in every region in the country, one is being eyed at the Bataan Peninsula State University (BPSU) for the entire Central Luzon.

During his visit in Bataan yesterday, December 9, the senator personally visited BPSU wherein he assessed the University’s buildings, laboratories and necessary paper works in offering medical degrees and programs.
He also lauded the partnership of BPSU with Bataan General Hospital and Medical Center (BGHMC) which can contribute in facilitating the process.

“Let’s continue to help BGHMC and BPSU, and who knows, in the next two or three years, we’ll be able to establish a School of Medicine because that’s our dream. We’ll work hard on it and I am committing that I will help on this,” Villanueva pledged.

The senator argued that creating more medical schools in the country will boost the ratio of doctors to patients in the Philippines which is currently at 3:10,000, a far cry from the World Health Organization’s recommendation to have at least 10 doctors per 10,000 patients.
Moreover, Villanueva revealed that out of the 18 regions in the Philippines, only eight have state colleges and universities with a School of Medicine which may be one of the reasons why the country is experiencing scarcity of medical doctors.

For his part, Governor Albert Garcia expressed his support to the senator’s proposal and pledged that the Provincial Government of Bataan will provide the necessary help to BPSU in the possibility of producing its homegrown doctors and medical professionals.

He added that Villanueva’s proposition is in line with the province’s vision of attaining the highest Human Development Index in the country, one indicator of which is prolonged life expectancy thru health initiatives.

The post Sen. Villanueva eyes establishment of School of Medicine in BPSU appeared first on 1Bataan.