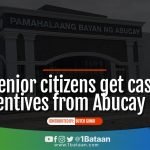 “That fund will come from the municipality”, the mayor pointed out. Senior citizens and their families in Abucay profusely thanked Tagle for the program. Townsfolks lauded the mayor for hatching the initiative showing his care and deep respect to the elderly.