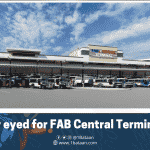 Management is eyeing September for the opening of Freeport Area of Bataan (FAB) Central Terminal.

Mariveles Councilor Ronald Arcenal who attended a meeting with FAB officials a week ago said it was raised that the soft opening of the modern transport is temporarily set on September.

The councilor said the overall plans and set up of the terminal were also discussed. Arcenal is the Sangguniang Bayan chairman of the Committee on Public Utilities and Facilities.

Aside from being a terminal family, a commercial mall will be built, and commercial lots spaces will be available.

The transport terminal is seen to ease traffic in Mariveles and provide convenience for commuters.

Hausland Group is the builder of the transport terminal complex.