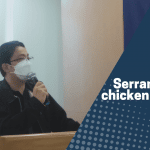 Board Member Benjie Serrano, chairman of the Committee on Agriculture, Food and Fisheries has invited officers of Bataan Poultry Growers Association to tackle chicken shortage in a committee meeting on Wednesday.

Erick Hermoso, president of Bataan Poultry Association, has divulged to Sangguniang Panlalawigan committee members various reasons causing the current poultry low production, one of which is the bird flu restrictions.

Hermoso also said some poultry farms are opting not to operate in the quarter July to September due to low quality of feeds in this part of the year rèsulting to stunted chicken growth but high cost of operation. Some Sangguniang Panlalalwigan members are amenable to the request of Bataan Poultry Growers Association to seek subsidy from the government to prevent poultry owners from quitting.

Serrano said he called the committee meeting aiming to really know the chicken shortage situation in the province and find solutions. The shortage of chicken in the country was highlighted during the past couple of weeks with netizens complaining about the unavailability of a popular chicken menu in a leading Filipino food chain.