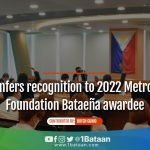 The Sangguniang Panlalawigan (SP) of Bataan presided by Vice Gov. Cris Garcia has unanimously adopted a resolution extending warmest congratulations and conferring recognition to a Bataeña, the first pediatric rheumatologist, Dr. Leonila Dans as one of 2002 Metrobank Foundation awardees.

In the letter-request of Gov. Joet Garcia to SP to pass the legislation, he said in being a Metrobank Foundation awardee, Dr. Dans exemplified the meaning of “Beyond Excellence”. “She is the first pediatric rheumatologist and one of the first clinical epidemiologists in the Philippines. As a professor of the University of the Philippines College of Medicine, she is the pioneering educator on pediatric rheumatology”, the governor stated. “Dr. Dans’ commendable career and exemplary contribution in health and education are deserving of deep appreciation and recognition. She has given pride and honor to the province, and has likewise inspired and given hope to fellow Bataenos.” The awardee was born and raised in Balanga City, Bataan.