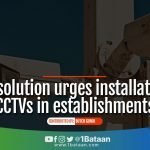 As a means to deter crimes, the Sangguniang Panlalawigan ng Bataan, presided by Vice Gov. Cris Garcia unanimously passed a resolution urging the lone city and 11 municipalities in the province to enact an ordinance prescribing the installation of CCTVs in establishments.

The resolution states that the installation of CCTVs can be added among the requirements in issuance of business permit to establishments.

In a report of the Committee on Peace and Order and Public Safety chaired by Board Member Popoy Del Rosario, particularly those that need CCTVs are establishments catering to a large number of customers or conducting transactions and operations which carry risks of being targeted by criminal activity, and those prone to accidents and natural disasters.

The SP resolution supports a DILG circular, which directs cities and capital towns to require CCTVs for certain business establishments in accordance with the Local Government Code.