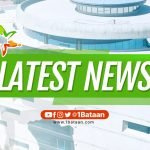 We have here the 1KaBataan junior officials who wanted to learn our proceedings, the vice governor told her colleagues at the session hall. “We welcome you,” she told the young guests.

She briefly explained the trail of letter-requests from other offices and committee resolutions into being part of their session agenda. One by one 1KaBataan junior officials introduced themselves to the members of SP.

“You are our future leaders, we may have a future lawyer here”, Garcia commented.

Responding on the query of Board Member Angel Sunga, SK Bataan Federated President and ex-officio Board Member Precious Manuel said there is no duplication of functions between barangay SK officials and 1KaBataan junior officials.

She said prior to attending the SP session, 1KaBataan junior officials were recognized by Gov. Joet Garcia during the flag raising ceremony.