Subic Port thrives as revenues up by 14 percent from Jan.-Sep. 2022 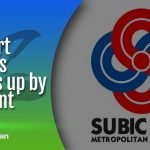 Subic Port thrives as revenues up by 14 percent from Jan.-Sep. 2022

Port Revenues for this premier Freeport is up with figures from January to September of 2022 recording ₱1,146,055,192.99, an increase of 14 percent compared to the same period last year.

According to Subic Bay Metropolitan Authority (SBMA) Chairman and Administrator Rolen C. Paulino, the current Port Revenue increase is in relation to the previous year’s record of ₱1,000,929,260.85, with a difference of ₱145,125,932.14.

“The record increase of Port Revenue this year compared to last year shows that the port sector of the Subic Bay Freeport is thriving, so we are expecting more ship calls here as we gradually ease out from the effects and restrictions of the pandemic,” Paulino said.

The SBMA Seaport department’s periodical report submitted by General Manager Jerome Martinez indicated the revenues collected from the first until the third quarter has already achieved 81 percent of their 2022 revenue forecast.

The report also indicated that the Port of Subic has also recorded an increase in Gross Registered Tonnage by 30 percent, recording 22,852,265 GT for the period of January to September this year, an increase of 5,328,361 GT from last year’s same period of 17,523,904 GT.

Meanwhile, Senior Deputy Administrator for Operations Ronnie Yambao cited that the increase of Gross Tonnage is due to the increase in foreign vessels, recording 22,240,369 GT for the said period. He added that this is higher by 31 percent or 5,205,914 GT from last year’s 17,034,455 GT. Yambao also cited an increase in Gross Registered Tonnage from the 611,896 GT derived from domestic vessels that came into Subic Freeport.

Moreover, Yambao also mentioned an increase in non-containerized cargo volume for this quarter with 5,536.171 MT as compared to last year’s 4,863,697 MT.

A 14 percent increase was registered, recording a difference of 672,474 MT.

The official however cited a negligible decline in the containerized cargo volume for this year, adding that there number of containers that utilized the Port of Subic were 190,168 twenty-footer equivalent units (TEUs) as compared to last year’s 192,217 TEUs, a one percent decline from 2,049 TEUs last year.

Chairman Paulino said that despite this “little hiccup,” the outlook for the Port of Subic is gaining momentum, and would likely trample last year’s records.

“The hit rate for our key performance indicators are around 90 percent, with only containerized cargo volume lagging, but I am sure that the agency will hit the mark before the year ends,” he said.

The post Subic Port thrives as revenues up by 14 percent from Jan.-Sep. 2022 appeared first on 1Bataan.