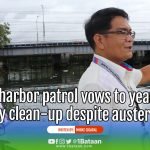 The Harbor Patrol unit of the Subic Bay Metropolitan Authority Law Enforcement Department (SBMA-LED) has improvised a trash boom that will sift trash along the Rizal Highway Bridge here.

According to the LED manager, Col. Alfredo P. Agustin, Jr., this project was implemented with the guidance of the SBMA Ecology Center, in time for the latter’s activity Bigay Dagat coastal cleanup earlier this month.

“It is our Harbor Patrol unit that came up with the idea of making this improvised trash boom to prevent the trash from entering the Freeport’s waters through the Rizal Highway Bridge after the mesh wire underneath the bridge came dilapidated,” Agustin said.

Agustin explained that the broken mesh wire underneath the bridge is awaiting total replacement and that the improvised trash boom is ideal at the moment.

Ador Fajardo, chief of the Harbor Patrol unit, explained that most of the materials they used to make the improvised trash boom were recycled.

It includes capped PET bottles they have collected from the marina and other sentinels.

They tied together with a rope that they found along the Triboa area; used old floaters in between a few bottles; and installed them across the waters under the Rizal Highway Bridge.

“We spent only ₱80 to buy an additional roll of copper wire to tie more bottles together,” Fajardo added.

Agustin added that he had instructed his staff to continue to collect PET bottles because the improvised trash boom will need replacement after a few weeks or months when they eventually wear out and turn brittle.

Agustin also disclosed that a third site is already being prepared for the installation of the improvised trash boom, which is the mangrove area also near the Harbor Patrol office.

“It cannot be done with just a single day of clean-up.

It would take a couple of days to clear the area before we could install another improvised trash boom,” he said.

This way, he said, they would not need to wait for occasional coastal clean-ups to collect trash.

They will be able to clean up every few days, all year round.