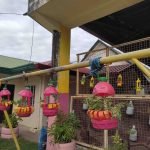 Moral said the indicators in identifying the top performing barangays for BECA include existence of Barangay Solid Waste Management Committee (BSWMC), functionality of BSWMC, existence of the Barangay Solid Waste Management Action Plan/Program, and Barangay ordinance on “No Segregation, No Collection”.
Also, percentage of household that practice segregation, ordinance on the “No Littering”, and existence of functional Barangay Material Recovery Facility.
Lote Puerto Rivas and San Antonio are Bataan’s bets in the city and municipal category, respectively in the regional assessment.

Other winners in the city category are Cabog-Cabog and Cupang West in Balanga who were tied in second place.
Moreover, East Daan Bago in Samal ranked second in the municipal category, while Colo in Dinalupihan, Baseco Country in Mariveles, Talimundoc in Orani, and Arellano in Orion tied for third place.