Ukrainians will be given resident-investor status in FAB- Pineda 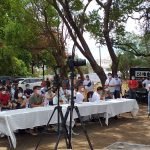 Ukrainians will be given resident-investor status in FAB- Pineda

Do not be surprised if you see Ukrainians in the Freeport Area of Bataan in the next few months.

Thus, said Authority of the Freeport Area of Bataan (AFAB) Administrator Emmanuel Pineda during last Thursday’s groundbreaking ceremony for the P138 billion FAB Central Terminal.  The terminal, complete with shopping mall aims to centralize and make the transport system efficient within the Freeport and neighboring areas.

Earlier, the AFAB team led by Pineda joined hundreds of investors, thought leaders, and investors in blockchain, artificial intelligence and internet of things (IOT) in this year’s business summit in Dubai where they were introduced to Shiekh Saqer Bin Mohamed Al Qasim and Group of Companies and founder of Future Innovation Summit and CEO of D1 Technologies and LEO Investments whose plans align with the long term plan of AFAB for the next 10 to 30 years.

In the said summit, he said, the attendees were mostly Europeans, very few Americans and Asians. “Because of this, Dubai will be reserving a slot for Bataan and AFAB in the forthcoming education summit,” said Pineda.

He added that many consultants in the IT field in Dubai turned out to be Filipinos, therefore, it was easy to deal with the experts. “Talagang sinasabi nila they are impressed with our charter,” Pineda added.

The post Ukrainians will be given resident-investor status in FAB- Pineda appeared first on 1Bataan.