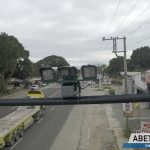 The Provincial Government of Bataan launched on Thursday (Nov.4, 2021) what it considers a breakthrough to monitor, observe and discipline motorists zipping through the 68-kilometer Roman Superhighway which spans from Hermosa to Mariveles.

The no contact apprehension (NCAP) program is a P50 million project to be undertaken with a private company through the 1Bataan public private partnership scheme. The QPax Traffic System will provide the technology while the operation will be handled by Metro Bataan Development Authority (MBDA).
In his statement, Bataan Gov. Albert Garcia said, “We are proud that our province is the host of the fastest growing Freeport in the country, however, we cannot sacrifice the safety of Bataenos who share the road with traversing motorists.”

With the help of NCAP, Garcia said the province is provided with a layer of safety in ensuring that those who do not follow traffic rules in Bataan will be apprehended and educated to curb the presence of reckless drivers.

The NCAP program utilizes the state’-of-art artificial intelligence technology that can accurately capture the conduction sticker and plate number of erring motorists through the information database of the Land Transportation Office. When the system detects a violation, a notice of violation will be sent to the registered owner of the vehicle upon review and approval of of the Bataan Traffic Adjudication Board (BTAB).

Garcia said there will be no more wild arguments between traffic enforcer and traffic violator.
Christopher Pizarro, MBDA general manager, said the cameras on Roman Superhighway are operating 24 hours a day and once a motorist violates traffic he or she will immediately receive notice of violation.