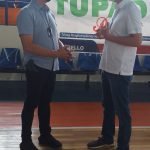 Bataan 2nd District Representative Jose Enrique Garcia III said on Thursday in Orani, that it is not always easy to ease up quarantine status in the province just because there was a slowdown in number of new Covid-19 cases.
He, however, maintained that the provincial government of Bataan still awaits the decision of IATF national on its request for new quarantine status.
Congressman Garcia said he had already talked with owners of parlors, barbershops and other similar establishments who requested the easing of restrictions.
“They are willing to follow protocols and other health restrictions like putting up air purifiers and admitting only clients who are fully vaccinated,” said Garcia. He said he would bring up the local businessmen’s request to the IATF national.
In his meeting with Orani town Mayor Efren Pascual, Jr., Garcia urged barangay officials to focus on villages with poor immunization status. Only 45% of Bataan population are fully vaccinated.
Garcia and Pascual expressed optimism that Bataan would achieve herd immunity by December, this year.